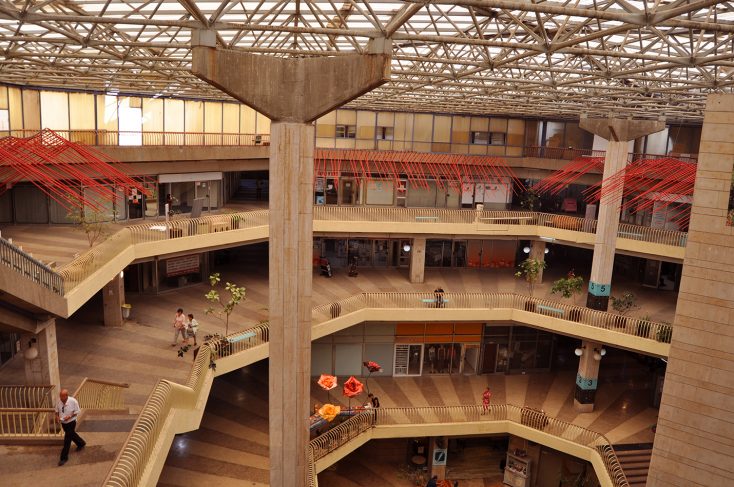 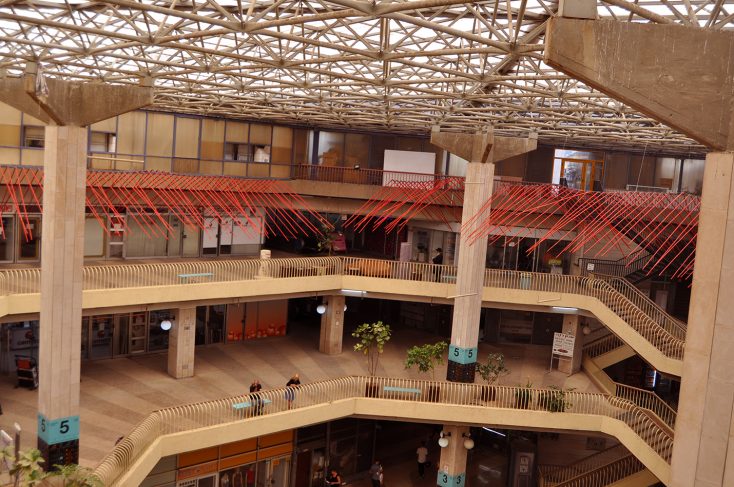 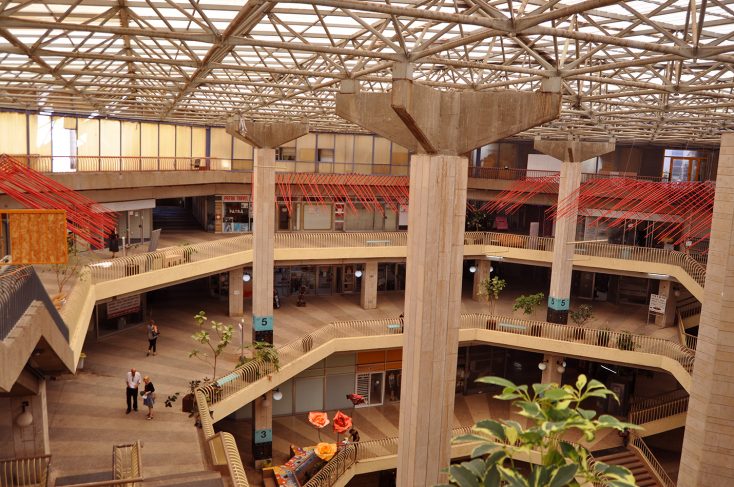 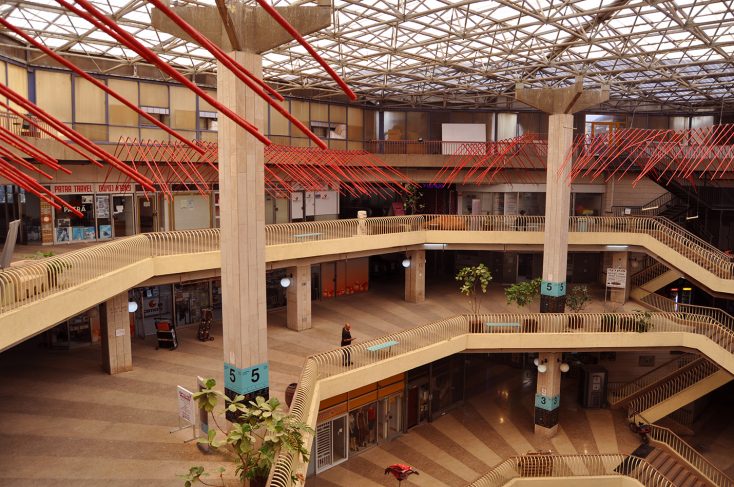 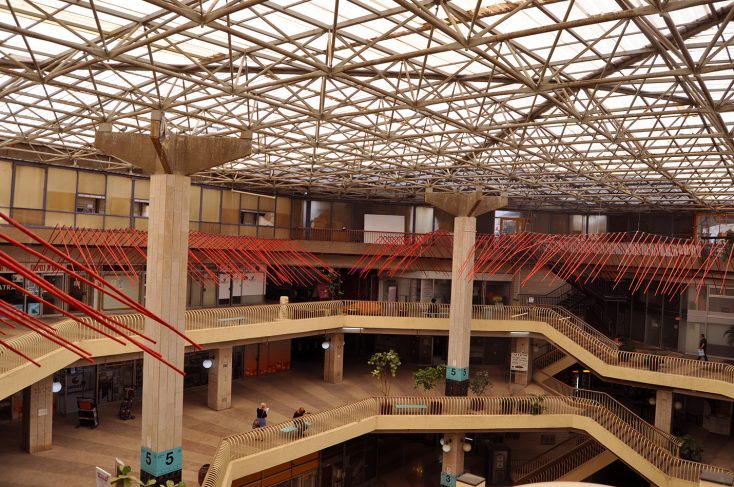 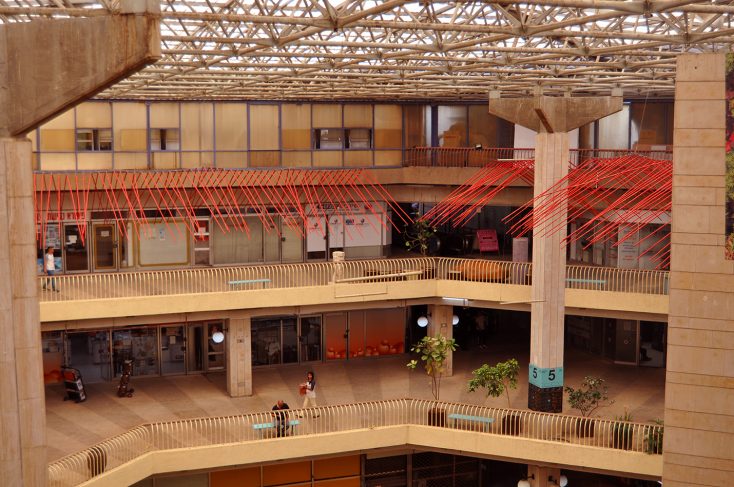 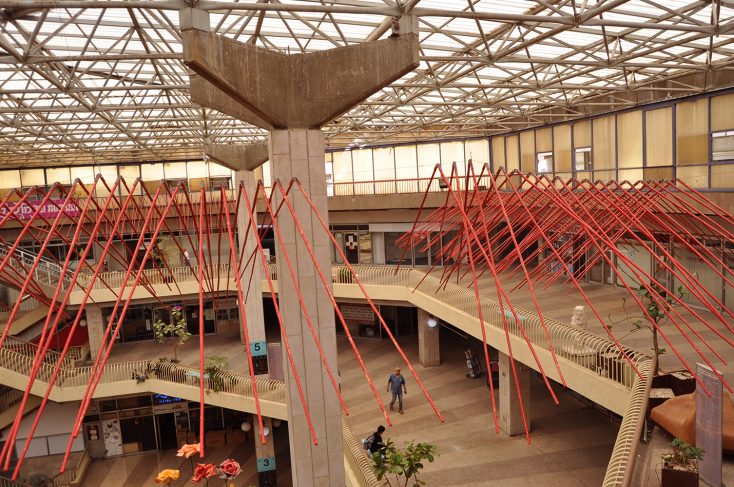 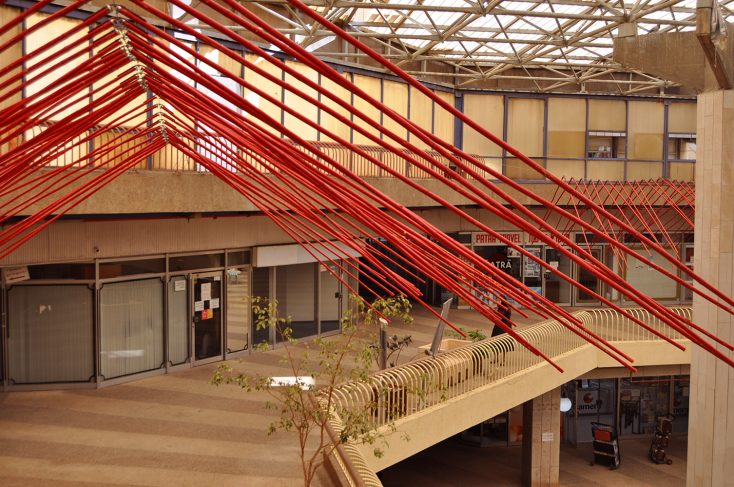 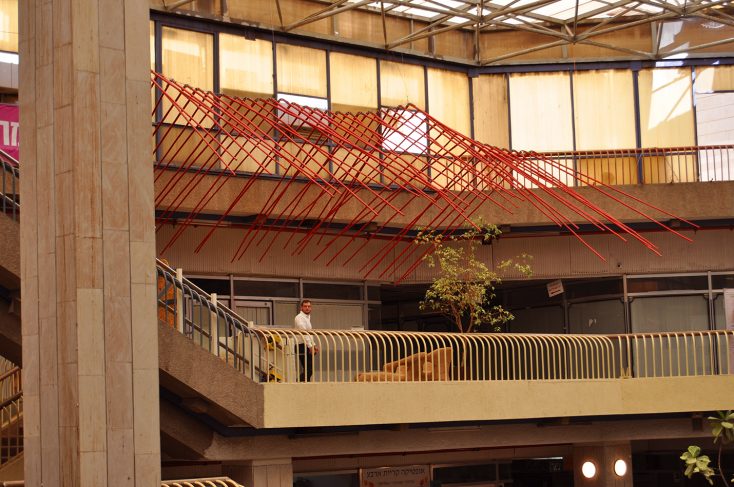 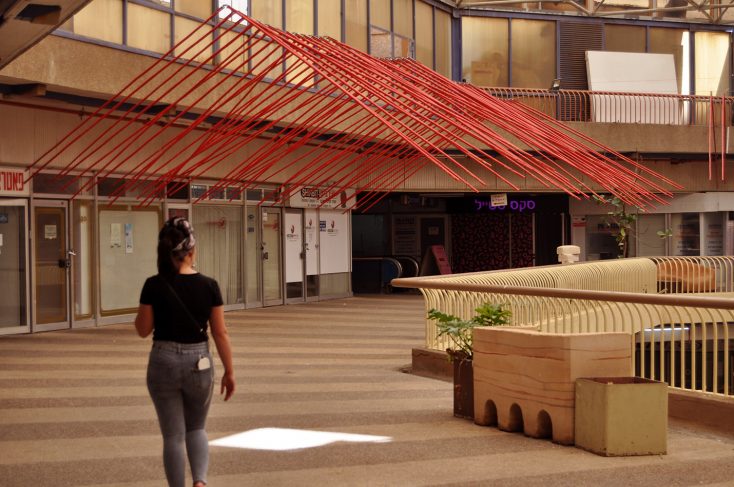 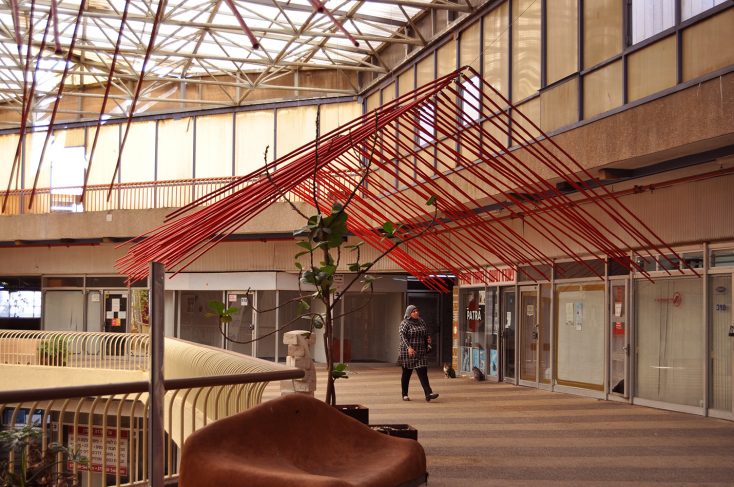 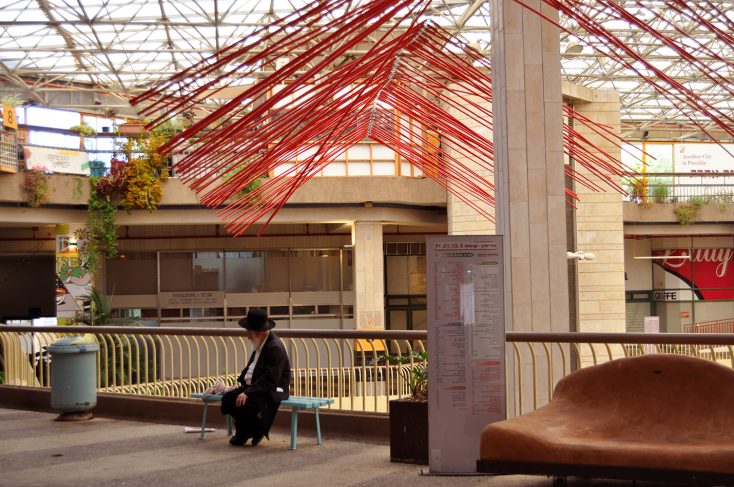 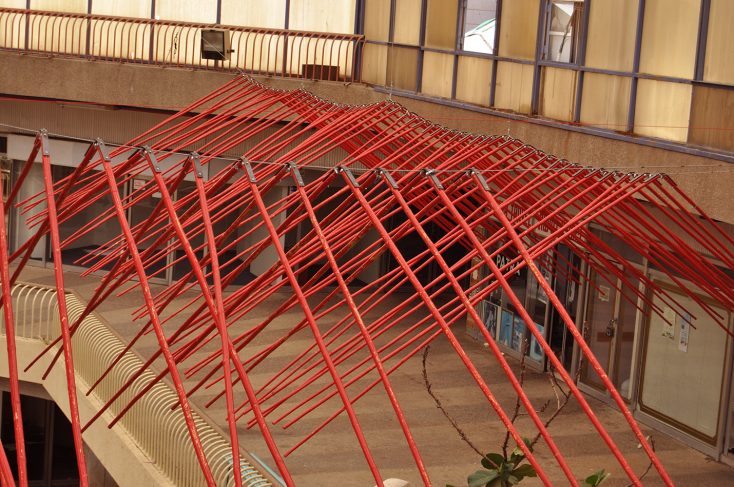 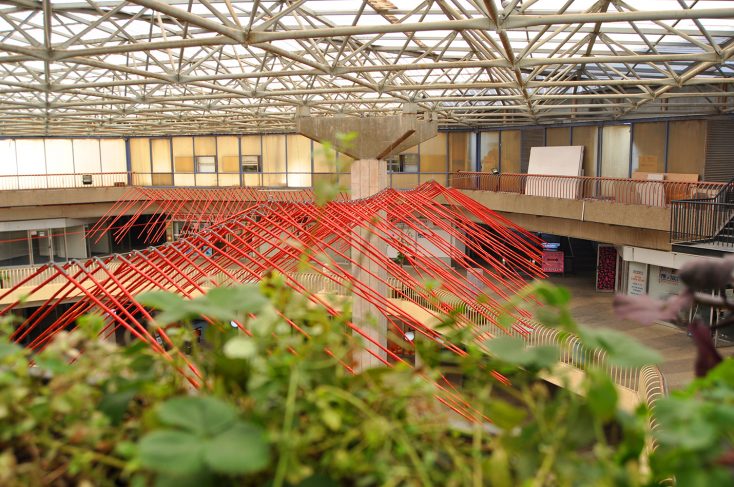 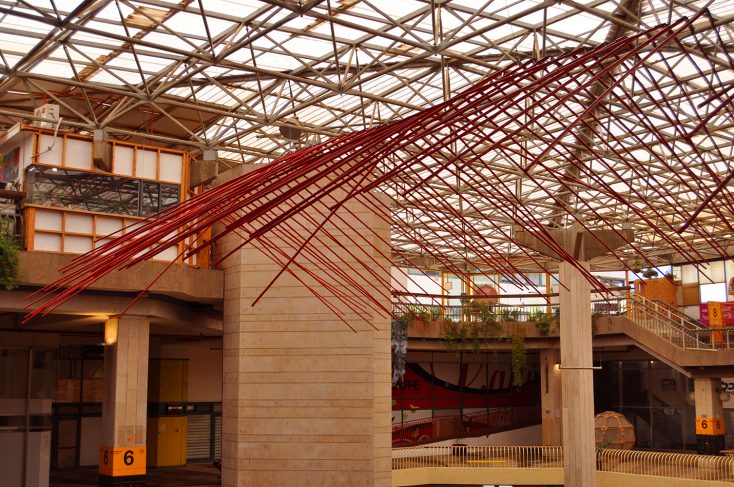 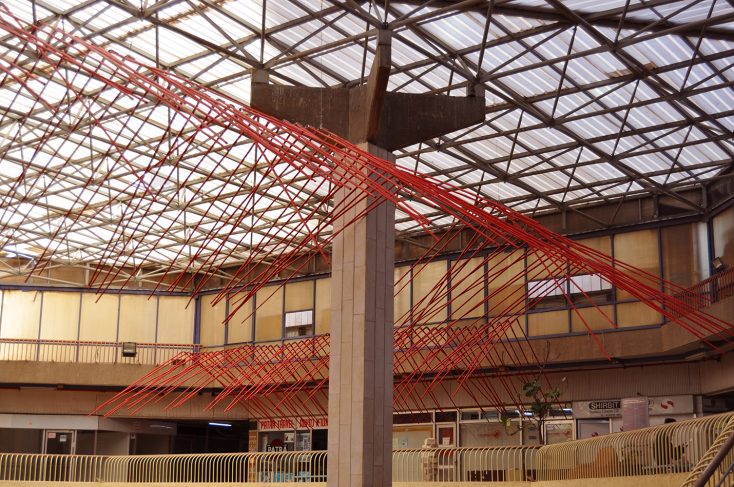 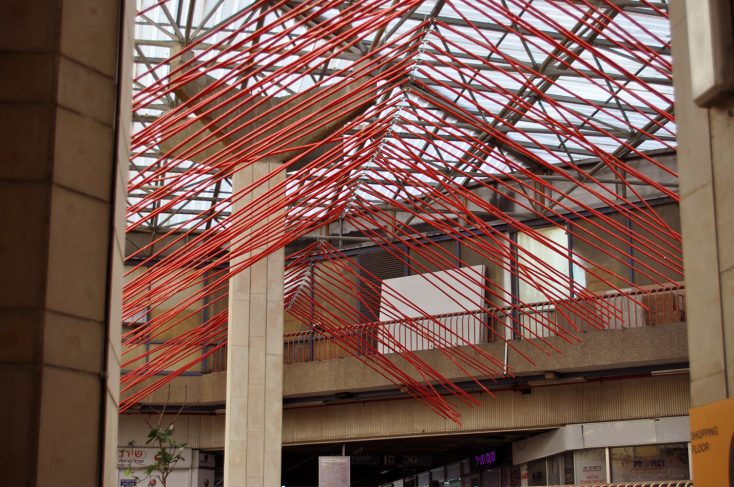 The sculpture “Roof” is a large scale mobile, suspended in the spatial void of the “Clal Building” Atrium. It was erected on the footprint of “Aliance” school “Tora ve’Melacha” in Jerusalem, which was built on the same site in 1888, and demolished to enable construction of “Clal Building” in the 70’s. The sculpture is placed hovering in the atrium space close to the original roof’s actual spatial position. It consists of 400 sticks, 3 meters in length, and attached in pairs, to form the shape of the pitched tile roof of the historical building. The bamboo pairs are spaced 25 cm from each other to establish a repetitive rhythm, which resonates in metaphor the pitched roof volume. The shape’s completeness is emphasized by the sticks bright red paint, yet the paint estranges the sticks’ from their natural origin. In this way the work seems to look like a children’s drawing, or a simplistic afterthought inscribed in the air.

The sculpture “Roof” is not an architecture or engineering project, it is devoid of functional utility, and it does not beautify “Clal Building’s” interior space. The mobile-sculpture is placed in defiance of the Atrium, it does not adhere to perspectival views, or interior wall positions. In places where the sculpture meets the building’s walls or structural members, it is cut, thus resembling archeological sites, in which historical relics connote entire structures. The sculptures’ repetitive vertebrates resemble remnants of a sunken vessel or the skeleton of a large sea mammal, suspended from the ceiling of a nature museum. “Roof” is self-referencing while at the same time it communicates with its surrounding. It draws its formal logic from history, yet reacts to its current day environment. “Roof” is a volume with in a volume, a material volume within a spatial void. The sculpture’s singular presence within the empty Atrium provides a comprehensible scale to the Atrium, charging the latter with physical as well as temporal meaning.